Where to begin? That is the question!

In the last 48 hours I have seen so much, heard so much, and, inevitably, talked rather a lot too (including an in-flight discussion on 3D Printing but that's a story for another time).

This post will be the first of a series of posts following my short sojourn in Paris, having been invited to attend Objet's media event at the Centre Pompidou - the Parisian museum housing the Multiversites Creatives exhibition, sponsored by the makers of the Connex 3D printing machines. 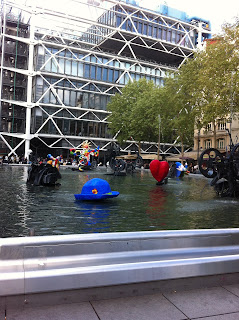 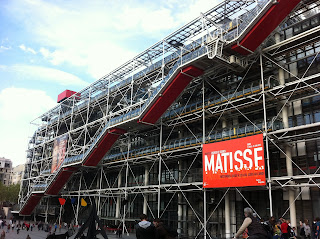 And that is really where I have to begin. Yesterday's incredible revelation, without any specific announcement it should be emphasised, from Objet about the collaborative R&D the company has been carrying out — in full stealth mode — that has resulted in the phenomenal full colour 3D printing capabilities of the company's Connex range and multi-materials.

Phenomenal is not an overstatement here, neither is spectacularly impressive.

The focus of the Parisian event was the work of Neri Oxman's collection "Imaginary Beings - Mythologies of the Not Yet." (A separate blog post will follow on this). An intriguing title pointing to a portfolio of pieces that was documented in a superior quality catalogue each attendee was presented with on registration before being directed to a sumptuous continental breakfast buffet. So there I was, partaking of the food, sipping the deliciously strong coffee, mesmerised by the view of the Paris skyline from Georges restaurant at the top of the Pompidou Centre, and I started to browse the catalogue. Having read the intro and an updated version of Neri's biography, I turned the page and was immediately captivated by the startling imagery in the brochure. The shapes were intrinsically complex and stunning — and the colours were piercing.

But it had not registered.

It was only on the third image that the realisation dawned. I went back to the first two, and then quickly thumbed through the other fifteen (there are 18 pieces in total), scrutinising each high resolution image. These pieces were not finished - they were not painted! Apart from anything else, it would have been impossible to apply paint to such complex shapes, using multiple colours, so cleanly.

But Objet don't do colour!!

During the short(ish) presentations from Objet's Chairman, Elan Jaglom and Neri herself, which took place prior to the guided tour of the collection, there was no announcement, indeed there was absolutely no mention from either of them directly relating to the colour capabilities of the Connex technology. There was talk of the R&D investments and the extensive range of materials Objet offers from Elan (again a separate blog post on my interview with Elan will follow) and an introduction to the Imaginary Beings concept from Neri, but not a single word about 3D printing in colour.

I could barely contain myself, as Neri wrapped up her speech I started edging forward — I was trying to figure out what was going on, and needed to get some clarification on this. Was I imagining it? I knew I was right about the colour but I couldn't believe I was right, why wouldn't they announce it?

Couple of things - the colours need to be seen to be believed. Some images here, but they don't do them justice. If you get an opportunity to see for yourself in the coming months, make sure you take it. 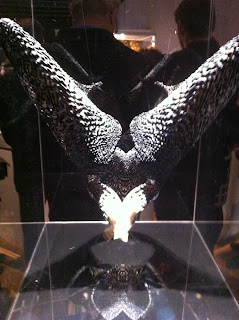 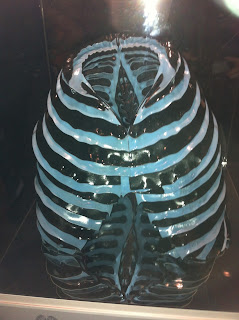 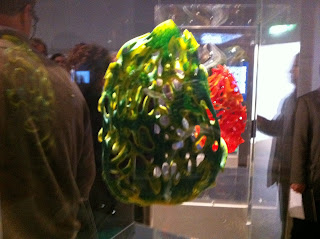 Also, after having spoken with a few of the Objet guys directly, all of whom had a glint in their eyes but totally played the whole thing down, the exhibition was unanimously labelled as "a technology demonstration" of the R&D Objet has been doing. They could not over-stress the fact that the colour capabilities are not commercialised yet and neither is there an official timeline for when they will be, well, none that Objet is giving away anyway. But be left with no doubt — they will be.

This is clever marketing!

Now, I know some of you will be reading this and thinking - colours - so what?? I am sure you will make your views known, one way or another. And, believe it or not, I get it. I do. Pretty colours are not necessarily an industrial designers first priority when developing a concept and testing functionality of a new product.

But this revelation goes further than just introducing a new aesthetic to Objet's 3D printing capabilities. Objet's collaboration with Neri is a prelude, a glimpse at where this technology can go. "It's just the beginning!" Regular readers of my blog will recognise that as one of my favourite lines associated with 3D printing, but if I heard that line once yesterday, I heard it a hundred times, and it wasn't me saying it!!

I came away from the event yesterday with a better understanding of Objet's full-on commitment to both continued R&D and its brand. Another observation that is worthy of note is just how integrated and committed the whole Objet team is, it's not a small team either, but they are like a well-oiled machine (no pun intended).

As mentioned, further blog posts will cover Neri's collection in more detail and Elan's take on the Objet / Stratasys merger and the future of the Connex.