Yesterday was a long day, but it was a really, really good day.

An exciting project that I am involved with demanded a trip down to the University of Bath to conduct an interview with Dr Adrian Bowyer, who conceived the RepRap project back in 2004 and initiated it the subsequent year. This is a man whose work and opinions I have respected for many years as he has gone about the business of evolving his vision for a self-replicating 3D printer. We have communicated in various forms during those years and, as might be expected, he was a contributor to the TCT magazine during my tenure there. Indeed, it was weirdly satisfying that as I carried out some research prior to the interview, Google actually took me to an article that I wrote in 2006 for TCT. Adrian's quote in the article was, as he said yesterday, "typically me" — articulate, forthright and well-informed. I also owe Adrian thanks for introducing me to the wonderful word: mellifluous.

However, we had never met in person, for one reason or another, and yesterday way exceeded any expectations I held beforehand.

In between filming we were able to chat at ease, and I was allowed to poke around the RepRap lab at the University and talk to some of Adrian's researchers and students. Well, I was in my element, and the jaw dropping moment came when I picked up the following piece: 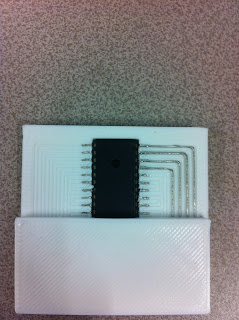 Chatting away to Adrian and his PhD researcher Rhys Jones (@rhysoj on twitter), I wasn't immediately aware of what I was holding, and then it sank in. I asked the obvious question, [add slightly incredulous tone] "Are you printing metal?" The affirmative response from Rhys, who is leading the research into this, came with a combination of slight amusement and typical self-deprecation. That is exactly what they are doing. Despite the fact that it is still quite 'crude' - his word not mine - the fact that it is possible at all on a RepRap machine is a testament to just how far the boundaries are being pushed towards the reality of personal manufacturing. Rhys showed me how they are creating the low-melting point alloy, and it is currently labour intensive, with moderate results. But it's getting very interesting and he promised more "fun" things in the not too distant future. These will be posted here in due course.

The other area where the research at Bath is pushing boundaries is that of colour. An issue that I asked about as I was fiddling with this 3D printed part: 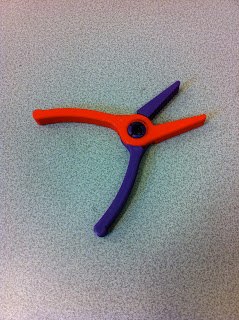 This is a typical RepRap style multi-colour part produced from using two different spools of coloured filament material through different print heads. Nothing startling there, but research being conducted by Myles Corbett, a final year project student under Adrian's tutorage, is looking into a 5-drive RepRap model that will result in a CMYK palette + white, fusing the colours precisely as they are printed. Anyone that works in graphic design or publishing will be aware of just how many colour options are available on a CMYK palette; 3D printing demands a white input to mimic the white paper onto which 2D CMYK colours are printed. For anyone not familiar with this, think endless colour possibilities.

As we stood there discussing those very possibilities, one of them proposed making it 6 drives and including translucent PLA. It was deemed a good idea - and further research was to go in that direction. And that's exactly how it gets done. So simple, so mind blowing.

Again, some success to date with the colour fusing, as documented on the RepRap Blog, but which of you would bet against them? I know I wouldn't.

The other issue that I discussed with Adrian, off camera, was that of when and how nano materials and 3D printing would and could merge. As I put forward my views, Adrian totally agreed with me, which, as he pointed out, doesn't mean we are both right; regardless, it was a satisfying moment.

For anyone that didn't see my tweet on this last week, this video link is a vision of the future that I have bought into, or something like it.

Adrian did also confirm to me that he is retiring from the University at the end of this academic year. However, as you would expect, he's not going to be sitting around twiddling his thumbs. His plan is to throw himself into his commercial business — RepRap Professional — which he runs with his business partner Jean-Marc Giacalone and his daughter, Sally. Needless to say, he is already looking at expanding the business.

It was a pleasure to meet Adrian and some of his students yesterday, and I would like to thank them for the time they spent talking to me. Definitely worth 9 hours in the car, alone but for mini eggs, red bull and my music. (Was going to put the band names, but it's just not worth the grief I'll get!!)
Posted by Rachel Park at 10:22 4 comments:

3D Printers Featured on C4's Homes of the Future

As I watched this programme on Channel 4 last night, it filled me with great joy to see just how far 3D printing has come just by virtue of the fact that it was featured on prime time TV on a Sunday evening. The coverage was positive, presented simply and informatively and came across as a relevant tool for households of the future.

My position on 3D printing and additive manufacturing is unequivocal in that it is a fantastic technology capable of great things for both industry and customised manufacturing — which are just starting to come to fruition. In previous posts, I have given my opinion and predictions on how 3D printing could potentially become a household tool, with a timeline of around 20 years. This was the subject of last night's programme, and it did a convincing job, although no specific timeline was offered.

3D Printing was introduced by the presenter as technology that offers, "a technological revolution in manufacturing and retail and I believe it will be as big as the internet."

Quite a statement. He went on to say that the 3D printing industry is estimated as being worth over £3 billion by 2020. Which sounds a large sum, but in the context of current global tech companies, is just a drop in the ocean. Indeed, 3D printing still has a lot of growing up to do.

A couple of things left me feeling a little uneasy though as I watched (resulting in the occasional twitch) namely that the programme made no reference to costs or required know-how, the assumption being it was a plug-and-play activity with a cursory nod to the need for design input via one's computer. It is precisely these issues that will, in my opinion, determine whether 3D printing does become a viable household tool in time. Those together with the material choices and material handling capabilities. Household use of 3D printing will require continued evolution of the processes that result in plug & play machines, well under £1000, that can process multiple materials safely & easily, and don't take up quite as much space as the Objet machine that was sat in the corner of the dining room in the "house of the future". The only other twitchy moment came when Mia, the daughter of the house of the future, was asked her opinion of the opportunities for customisation that 3D printing offered. She was excited and very obviously inspired by the tech, but this quote sums up the monumental cultural shift that also has to take place, in that Mia, a teenager, said, "I'd still prefer to go out and shop."

Email ThisBlogThis!Share to TwitterShare to FacebookShare to Pinterest
Labels: 3D Printing, Channel 4, Home of the Future

What a start to 2012! Inspiring and exciting in the world of 3D Printing and Additive Manufacturing. But while the debate continues apace about the future, and I love being a voice in that debate, I think it is also important to highlight the great things that are happening now — these technologies are doing great things and making a real difference with every week that passes.

iMaterialise in Belgium seems to be on a similar wavelength, and since the start of this year, each week we are treated to the week in 3D printing. I recommend it highly. (Although, top post today is a treat from 1989!)

The most touching 3D printing application story that has emerged this week, reported across many media channels, is the replacement of the lower jaw of an 83 year old woman, once again in Belgium. The replacement jaw implant was a complete success and the fact that it was 3D printed in medical grade titanium, with a bio ceramic coating brought advantages that included reduced surgery time and faster recovery. In addition, the implant was tailor-made to fit precisely reducing discomfort significantly, with the ability to talk, swallow and eat with 24 hours. How's that for making a real difference?

In terms of developments on the personal 3D printer front. I have only just discovered Makibox. Makible emerged last year as a crowd funding site for "makers and cool projects". Since the start of 2012, however, the team behind this project has launched, predictably on Makible (why wouldn't they), the Makibox DIY 3D printer. Frustrated in their efforts to build a Prusa RepRap kit, and logging their efforts, telling comments include: "it came in a few boxes with no concise instructions and literally was a box of parts." And: "the connections to the driver shield were confusing to even the competent engineers within the group." These frustrations are not uncommon and rather than whining about them, the team set about creating a new printer — one that overcomes these problems.

Another company that has done exactly the same thing, for exactly the same reason is A1 Technologies, based in London. A1 has long been an advocate of low-cost 3D digital technologies for designing and making in 3D, indeed they sold the very first low-cost commercial 3D printer — a RapMan kit — back in 2009 and have built up an impressive portfolio of low-cost advanced technologies for 3D input & output that can all be integrated. As a distributor of low-cost 3D Printers (RepRap derivatives) with a wealth of experience and expertise, A1 has been vividly aware of the frustrations of assembling a 3D printer that would then go on to print parts reliably and consistently (or not). They looked around at the emerging different options, from a distributor perspective, and decided to take their philosophy of designing and making to heart. The result is the Maxit 3D printer, which has been designed, developed and constructed to overcome all of the issues A1 faced daily. The printer will be launched within the next few weeks as a crowd funded project for the first 100 machines.

What strikes me about these two projects the most? People that believe in 3D printing, identifying some of the current problems, and actually taking the challenge on, directly, to move forwards. Positive innovation driven by negative experience.
Posted by Rachel Park at 11:23 6 comments: