My Day at Develop3D Live

I had a great day yesterday at the Warwick Arts Centre — the venue for the inaugural Develop3D Live one day conference. The event was organised by the publishing team behind the Develop3D magazine (print & online). After yesterday, this event will become an annual one I am sure, and a welcome addition to the Develop3D product group. I do not know most of the team personally, despite feeling like I do from seeing them online most days (they use Twitter brilliantly). From this I have gleaned that they are a closely knit team, passionate & knowledgable about their subject area and often outspoken; some give the impression that they fly by the seat of their pants, they probably do, but this belies an informed strategy that has brought well-deserved success.

Product development using 3D tools is what Develop3D is all about. The clue is in the name funnily enough! The one-day conference and exhibition served to bring together a community of designers and developers that are using and often abusing the very latest 3D tools in their day to day work, although to hear some of them talk they go to work to play. Software for design, analysis, data management, reverse engineering etc as well as hardware — computers, scanning, milling & 3D printing — were all represented.

Apart from the first keynote presentation by Jason Lopes of Legacy Effects (more of which later), the presentations ran across two streams all day and were an eclectic mix of personalities including end users, vendors and service providers. I fully admit that prior to attending I wondered if this would work. It did! There were many complimentary comments that I heard on the range of speakers and the content covered across the day.

From my point of view I was extremely keen to hear from the speakers covering 3D printing and additive manufacturing (kind of obvious huh?) and they didn't disappoint. There were two end users, a vendor and a reseller presenting. All did a great job of positively promoting the technology from their own perspectives with engaging presentations that also provided key information for delegates.

First up was Jason Lopes, the keynote I mentioned earlier. Jason works at Legacy Effects in California, and I have been aware of his truly stunning work within Hollywood for some time, producing as he does some of the instantly recognisable and iconic film props and masks for blockbusters such as Iron Man (I saw, touched and photographed the original mask, my son was sooooo impressed), Avatar, Real Steal, Twilight Breaking Dawn, and so on. 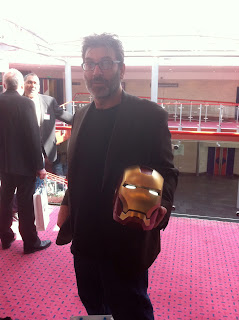 3D printing is a key enabling tool for the Legacy Effects team, along with 3D scanning and data manipulation tools. Meeting Jason in person yesterday was a real honour and a delight, he is a rare breed, all at once unassuming, extremely knowledgable and a wholehearted 3D printing supporter that keeps it totally real. His presentation was, for many people I think, a highlight, showing as it did just what this technology can do, when used alongside other 3D tools. According to Jason, Legacy Effects realised early on "that it could utilise 3D printing on every project it is involved with in one way or another." Perhaps the central message Jason imparted to the audience was this, traditional tools are still valid, indeed vital, but 3D printing brings added value. Chatting with Jason after his presentation I was not at all surprised to hear further evidence that he is passionate about his work, what did come across though is that he is even more so about his children, who at 9 and 5 are fully conversant with 3D design and 3D printing. He couldn't wait to get back to them — a true measure of the man in my opinion.

A couple of presentations later it was gratifying to hear Alice Taylor present her experiences setting up Makielab, a toy company she has established and developed in the last 12 months. After having worked in the toy industry for some years, Alice founded Makielab to challenge the traditional doll sector, and 3D printing is a central tool within this premise. To date traditional methods of manufacturing dolls has prohibited true customisation for the customer due to costs and the difficulties involved. However, Alice believes that 3D printing has evolved to a stage where this is changing and the Makielab concept will take doll customisation directly to the customer, enabled by 3D printing. Like Jason, Alice is fully committed to and engaged with the capabilities of 3D printing in the real world. Excited about the opportunities if affords, certainly; but totally without hype and exaggeration. Another truly inspiring individual.

On the other side of the Warwick Arts Centre, about an hour later, in a much darker room, with no phone signal for tweeting, David Price of Laser Lines presented on the latest developments within the Stratasys brand of additive manufacturing systems, and how these compare with the emerging 3D printers at the entry level of the market. The central proposition being that the development of these machines and the materials for them is wholly driven by MANUFACTURING applications. Examples of how this is so came from a video demonstration of the ULTEM 9085 thermoplastic material, which has been approved for flight applications and demonstrates superior strength. Dave went on to inform his audience (and me, wasn't aware of this) that Laser Lines also offer materials for additive manufacturing applications with full batch traceability.

Finally, later in the afternoon, after a lovely lunch (the raspberry chocolate things were to die for) it was great to settle down and listen to my old friend Stuart Jackson of EOS tell the audience about the state of play for the vendor of superior laser-sintering additive manufacturing machines. I thought I knew about everything he would cover. Pride comes before a fall and all that. I didn't! I did know that like Stratasys, the emphasis is all on manufacturing applications — the EOS range can sinter PEEK and other plastics and metals. I did know about the great work EOS is doing supporting Digital Forming, a company that is developing consumer facing design software, with manufacturing & design based constraints built in. I did know that EOS had sold its 1000th system towards the end of last year. And I have seen most of the applications that Stuart demonstrated in his presentation (the violin, the teeth, the lamps, the work at EADS with aerospace components, the architectural models, the bionic arm, the skull implants and the prosthetics).

Here's what I didn't know:

EOS is about to launch a micro machine — an additive system that builds micro parts, in metal, at 2 micron layers. Applications endless. Cliched but true!

EOS is regularly and successfully laser sintering 18 carat gold. I saw some stunning images of jewellery and consumer products built in that very material.

Over 70% of dental crowns produced in Israel are produced using laser sintering!!

So that's a quick overview of the additive presentations — I saw a few others too. Highlights were Gustavo Fontana of Bose (just too cool for words) and Blake Courter of SpaceClaim (2012 software version released yesterday & looks impressive, even to my inexperienced eye).

I also met up with old friends and new, contacts exchanged, lots to get on with.

A really great — and productive — day, and everyone that I spoke to and that has tweeted about it since seems to agree with me.
Posted by Rachel Park at 11:44 1 comment:

The Role & Responsibility of B2B Press

I am pretty sure of my position on this, and, as is my nature, am going to share my thoughts here — if you feel the urge, you are more than welcome to throw in your opinions and have your say on the issues, but I would politely request that no one uses this blog as a platform for personal attacks on specific titles / personalities. And at the risk of being accused of censorship, I am stating upfront that any offensive or personal comments will be deleted. This is my blog, with no financial gain involved, my decision is final, please respect that.

Okay, with that out of the way, many of you probably are aware that I did work as an Editor on a B2B title for many years, therefore I do consider that I have significant insight into the commercial demands of this type of publication. And here is the central issue — it is a commercial operation that provides a service — to clients (advertisers) AND readers. Pretending or wishing otherwise is naive.

Editor's of B2B publications often have to walk a knife edge to achieve the right balance, keenly aware of their readership and increasing circulation with objective content, whilst cultivating relationships with advertisers, to source new information and challenge them where necessary. It's not easy, and you can never keep all of the people happy all of the time — it is an old adage, which is supported by my own experience — but with care and attention, you can keep most of the people happy most of the time.

My opinion is that B2B media offers a valid service, useful to both sides when done well.

It's the relationship between the three parties — advertisers, readers, B2B medium — that raises the interesting dynamic, because they are all completely interdependent.

The B2B model, whether in print or online, generates revenue predominantly through advertising. That's a fact. Any advertiser in any given publication is looking to generate business through the promotion of their product or service to a guaranteed audience of readers, for which there are audits. The magazine cannot exist without the advertisers, the advertisers won't place ads without readers, and the readers will fall away without decent magazine content.

It's a fairly obvious thing to say, but adverts are typically going to over hype the company, product or service it represents — it's the nature of the beast — and companies pay to do it. That said, any reader with a single ounce of common sense understands that medium.  The editorial content, however, has to be different — it has to be both credible and tactful — a source of information that is valuable to the reader without alienating magazine clients. By its very nature, a B2B publication will focus on a specific industry sector, and as such needs to cover the breadth of its industry as impartially as possible, to offer constructive information, that informs the reader, from as many angles as possible, with what he/she needs to improve their own business. My opinion is that it is the Editor's primary responsibility to take the breadth as wide as possible to ensure credibility, that, along with keeping abreast of the latest breaking news. For me a B2B publication needs to offer breadth over depth, and where depth is required, it will seldom be within the remit of the Editor, who then looks to independent industry experts to supply what is required. The independence is highlighted because this is what is required — by advertisers and readers — to maintain integrity in the long term.

When difficult questions arise, which they invariably do, then a B2B platform can offer a professional and positive forum to debate the issues at hand — this often leads to new ideas and extending networks. It can get heated, it can even turn nasty, but the majority of people tend to have the perspective to understand the dynamics and the manners to agree to disagree where necessary.

When a B2B title works for an industry, there is no better place to be to get the big picture.

Writing about all this is making me feel nostalgic — and just a little sad that I'm out of the game.
Posted by Rachel Park at 12:35 1 comment: