After the countdown and the subsequent announcement, it's time for the dissection to begin.

My initial thoughts are as follows, but this is probably not for 3D printing geeks.

I think it's safe to say that the overall response to the new Makerbot Replicator 2 desktop 3D printer has been positive. For a start it would be hard to repel the sheer enthusiasm and positive energy that Bre Pettis, Makerbot's CEO, exudes when he talks about the Replicator 2 (or anything Makerbot-related come to that). He's a believer — through and through.

Once I FINALLY got my computer to behave I was able to watch the video announcement (still haven't seen the real-time announcement mind you) that was posted to the Makerbot homepage. But that wasn't before reading the brochure a couple of times. Taking it all in, I have to say it is all one very cleverly composed message with great imagery, as well as charm, personality, style and, most importantly of all, a compelling product. 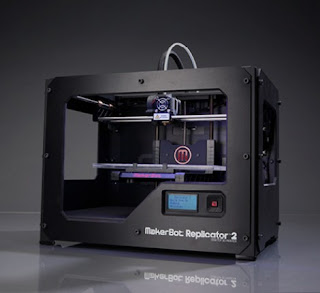 This new 3D printer has been purposely designed and developed to have style AND substance. If you think about it, Makerbot has rarely been short of substance in the market segment (mid-lower end) it operates in. In terms of product, it has sometimes been accused of lacking style. I'm thinking of the CNET Makerbot versus Cube face-off and comments from a wider audience that it's a garage tool rather than a consumer product for the home. In contrast, the Cube from 3D Systems oozes style but lacks substance.

This is not just a product announcement; it is, I think, a gauntlet throwing exercise to the rest of the 3D printing market. I've mentioned 3D Systems, but watching the video there was also a direct reference to MCOR's 3D printing process. As Bre waxed lyrical about the 100 micron layer thickness and what this meant in terms of parts that could be used directly off the machine without sanding or post-processing, he qualified this by saying each layer was as fine as a layer of paper. As if that wasn't enough, the video supplies a visual image as he speaks — flicking through a ream of A4 paper.

Then he went on to pull a bright blue owl off a Replicator 2 build platform to highlight the resolution capabilities. Why blue when talking about resolution? Check out MiiCraft, a machine that is all about fine resolution — all the marketing material uses bright blue parts built on that machine.

Twice, at the beginning and at the end, Bre states with emphasis that the Replicator 2 "sets the standard in desktop 3D printing."

Couple of notable points, the Makerbot only processes one material — PLA. But not just any old PLA, it is optimised specifically for the Replicator 2 and Bre referred to over and over as "Makerbot PLA filament."  This is a brave move - a few people weren't impressed, but the reasoning behind it can't be faulted — it's biodegradable and it also reduces energy consumption by 32% compared with the 1st gen Makerbot 3D printer. Also, the build volume for the Replicator 2 sees a 37% increase over it's ancestor. This is good going and one of the consistent demands from users. That was never going to be a bad move. 410 cubic square inches in all, which converts to 12"x6"x6" (xyz). The software is no longer open source either, which got tongues wagging — the makers are not happy about this. But for a serious commercial operation, I don't think this is a bad thing, and it means that Makerbot can build some distance from clones like Tangibot. The open source / closed commercial operation is always going to be a sensitive one — but professional buyers need reassurances and open source methodology, despite its many benefits, just does not offer assurance.

What was unanimous, was that without fail, everyone watching and listening wants to see parts for themselves. That includes me. We know they'll be at Makerfaire next weekend, what I'd like to know is if they'll send some test pieces over to TCT Live next week?

Anyone from Makerbot reading this ...... pretty please?

3D Printing and RPES Catch Up

Not quite sure what happened to summer, but it's been a busy one. I don't even really know where to begin to catch up here on my own blog - I have been so caught up writing for other people.

Actually, that's where I'll start, with a mini bibliography of my recent published work, just so you know I'm not making this up! ;-)

Obviously there are the posts on Personalize — all 18 of them:

Also, I started a series on Engineering.com about 3D printing and barriers to adoption. That started out as a single post but developed a life all of its own — thanks must go to contributors: Kevin Quigley, Russell Beard, Jez Pullin, Rachel Trimble, @RichRap and Magnus Bombus!

First three have been published, and I think the last one is scheduled for next week.

Part 1, looking at costs of 3D printing is here; part 2 covers materials and surface finish/accuracy and can be found here; and part 3, published today, covers 3D data and is here.

I've also conducted and written up some interviews for Innovate3D & CADdigest. Some inspiring stuff going on:


BeautyBit™ – a Broken Nail Leads to an Invention

There has been the TCTLive Conference on 3D Printing and Additive Manufacturing to finalise and prepare for. Just in case, it's next week (25th/26th Sept) at the NEC, Birmingham UK.

Plus have you seen all the news lately, so many new 3D printers — right across the board — from ExOne and Sigma Labs with new metal systems. New entry level machines include the Pandabot, Eventorbot and the HYREL. There's a really interesting new one coming next Wednesday from Formlabs too — this one is causing much excitement as a few details start to leak. I've been promised more info by the end of the week — I'll share here if my source comes through!

And then of course there is the big announcement from Makerbot in approximately 5 and a half hours. The pre-announcement announcement that is so de-rigeur these days came with a slight twist as the cover of Wired Magazine — depicting Bre Pettis holding the latest gen Replicator — was "leaked". It was a nice touch, I have to say.

I have an announcement of my own to make soon too, but fear not, it won't be pre-announced!

I hope to see some of you in person next week .... take a deep breath, TCT is always a wild ride!