Something A Bit Different within the 3D Printing/Additive Manufacturing World

At this time of year (post Euromold) there is generally a great deal of buzz and internet chatter about the new additive manufacturing / 3D printing developments that were announced at the German design and manufacturing show. Many vendors favour Euromold as the launch pad for their newest machines and/or materials for understandable reasons.

However this year, despite a couple of "new" [for new read 'different sized'] machines (3D Systems, Objet) and improvements to materials, is a year of incremental improvements and the buzz just doesn't seem to have manifested itself. The loudest gasps seem to have emerged from the announcement that MTT is splitting its activities — with the German and the UK operations going their separate ways. Interesting, but really just company politics. It will take some time to see where that is going and the intent behind it.

Similarly, Bits from Bytes seems to have hit the wrong note by producing a pink version of its RapMan kit and branding it the 'RapChick'. Gimmicky tokenism is NOT what this industry needs. I did start to write my ranting response down, slept on it, and thought better of it. Deleted the lot. I'll just go with this much more reserved paragraph here, and also reference a much more mature and productive response from Ann Marie Shillito of Anarkik 3D: http://annmarieshillito.wordpress.com/2010/12/06/virtual-3d-world-is-very-bright-and-tangible-but-not-pink/

Anyway, to the point of this blog post — something that came to my attention this morning and made me really sit up and take note. It came via REPLICATOR [replicatorinc.com], a blog post that today was awash with information. But pick through it carefully and you find a fascinating nugget detailing "Giant 3D Printed Chairs." I've seen chairs before — but not quite like this. The original article is from Suzanne Labarre at Co.Design [http://www.fastcodesign.com/1662793/giant-robot-prints-chairs-from-ground-up-refrigerators-video]. 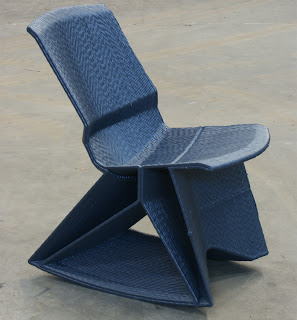 The whole project is the work of a Dutch design student, Dirk Vander Kooij (nice name and I really like his hair!!). He has obviously worked this design concept up in a 3D CAD package, but then this remarkable young man has used his knowledge with some ingenuity to breakdown some old fridges into usable material that can be deposited layer by layer (sound familiar??) via a rusty old robot arm. And it really is rusty, as you can see in the video. The robot can be programmed to produce the chairs in a variety of sizes, shapes and colours, all at low resolution, at approximately two hours per chair. If, like me, you are starting to do the sums in your head, there is some serious potential here. Now there is no indication of how long it takes to break down the fridges or how long it took to refurb the robot and so on, which would all need factored in. However, the latest news update is that Dirk is offering these chairs for sale at 800 Euros each. And as Suzanne points out, if the machine was running round the clock, it could produce 4000 chairs a year — that is a potential turnover of 3.2 million Euros. Anyone else just spluttered into their coffee?? My guess is the chairs possibly won't sell like hot cakes in the current climate at that price, but this is a true example of an additive manufacturing application coming from left of centre and I truly hope it becomes a big success story for Mr Vander Kooij.

The video demonstrating the process in action is entitled "Endless" which I am taking to refer to the possibilities here. I am now wondering what could be achieved with a bigger budget and state-of-the-art robots in a clean room facility.
Posted by Rachel Park at 10:21 No comments: