Probably One of my Favourite 3D Printing Interviews to Date....

At the recent 3D Printshow in London, I conducted a number of interviews with inspiring individuals doing some amazing things with 3D printing technology. Over the years I have been lucky enough to speak with and interview lots of different people and learned so much in the process. Not least, how to improve the results when pointing a camera at people. 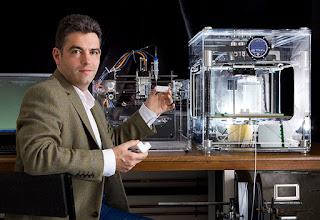 My interview with Lee Cronin, a Professor of Chemistry at Glasgow university has to be one of my all time favourites though. I have been following Lee's work for some time, and I am a big fan of his Twitter feed (@leecronin), which is not just about 3D printing and chemistry, although those things do feature. Rather it points to a well-rounded individual, for whom family is important and world-issues matter, and he has an excellent sense of humour.

That was all confirmed when I met Lee for the first time the night before our interview, at the official launch of Disruptive Magazine, when considerable volumes of alcohol were involved. Things were dialled back slightly by the time the camera was rolling the following morning, but the interview still teases out some of the fundamental issues that Lee is confronting in his bid to democratise chemistry for drug discovery and delivery to the world at large.

The interview has gone live on Disruptive today, you can view it here.
Posted by Rachel Park at 10:55 No comments: