Ups And Downs - It all Works to the Good

Got to be honest – it has been a bit of an up and down couple of weeks for me. Went through a not insignificant down period, when I was questioning the whole 3D printing thing. Not the technologies themselves, obviously, they are still real, they are still evolving apace, and sales of machines across the board are still increasing.

So, why the downer? Sometimes, doing what I do, I get the feeling that I am just banging my head against a brick wall and only preaching to the converted! It’s happened before, and I’m sure it will happen again. It is par for the course really [do you like my timely golf analogy as a hat tip to the British Open?] as a commentator in the 3D printing space when there are weeks that you can see huge leaps and bounds forward that are so exciting and uplifting and other weeks when I really do wonder if anything I say actually makes a difference, and, if it is time to get a proper job!?

I have had a few conversations in the last couple of weeks that have reiterated that the full potential of 3D printing is not even close to being realized today. And that the technology processes and platforms that exist today will be regarded as quaint, archaic artifacts that point to how the pioneers of this technology for mainstream makers and consumers worked with rudimentary equipment as they developed and progressed the technology itself and applications.

The most recent conversation was particularly enlightening, I think maybe because it was so unexpected, and it taught me that preaching to the converted is not necessarily such a bad thing.

Heading down to London for some much needed training on WordPress, I was intrigued to discover that the person conducting the training, like me, is a freelancer, but unlike me, he has a number of strings to his bow. Alex supplies website design and coding services — no surprise, based on why we were there. He is also a freelance industrial designer and the Designer in Residence at Glasgow School of Art, where his responsibilities include teaching 3D CAD and consultation on 3D printing and CNC machining.

Needless to say, even as Alex displayed endless patience with regard to our primary purpose, we often got sidetracked with conversations about 3D printing and its application in the real world. As we debated what it could do now and the limitations it presented, particularly in terms of surface finish and strength, and even understanding these limitations as I do, some of Alex’s opinions really shocked me, including the fact that he viewed even some of the most sophisticated industrial 3D printers as wholly deficient. Furthermore, I had the strong impression that Alex viewed my ideological views rather skeptically. At the end of the day, having accomplished a satisfactory result in terms of using the WordPress CMS, it transpired we would be taking the same tube journey and we continued our conversation about 3D printing for prototyping applications and mainstream / consumer adoption. Alex, a pragmatist, was adamant that it will never be a household tool, although he did express his vision for 3D printers as toys within some households. I challenged his use of the word ‘never’! When I backed this up with my own forecasts with nano materials and my predicted timeline for 3D printers, in a form unrecognizable today, becoming a true plug and play device, I think I gave him some food for thought.

I have tried to avoid predictions for the future recently in a bid to eschew hype and speculation, but in an emerging sector, it is inevitable and in some cases, desirable, I find. So long as I keep moving forward, at this time, I’m not sure it matters if it’s a cyclic motion.
Posted by Rachel Park at 21:42 1 comment:

Mojo Man is in My House

Last week, at the International Conference on additive manufacturing and 3D printing, I got to see a Mojo 3D printer in action for the first time, courtesy of Dave and Mark from Laser Lines — two long standing members of the AM community that know their stuff inside out and who both have a wicked sense of humour.

The newest addition to Stratasys' family of 3D printers, Mojo is a professional FDM printer that would sit comfortably on a large desk, I'm not going to regurgitate the press release here, but I will point you to Todd Grimm's review of the machine, which is here. (It's a good review which I think is why Stratasys have advertised on the site! :-/) Anyway, at the show last week, Mojo was snuggled between a Fortus machine and a Dimension machine and therefore looked small. Up close though, it's not that small, but very manageable it seems. It was printing throughout the show days, and one of the things is printed is this little man. A few people requested close ups, so here you are: 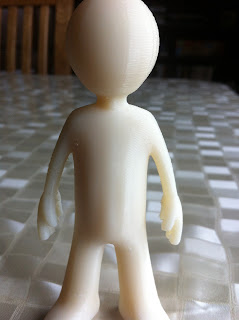 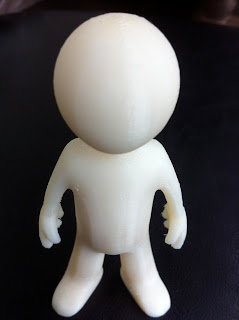 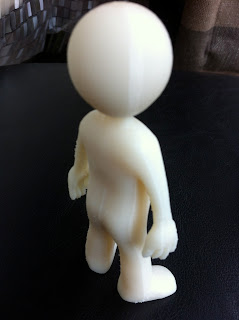 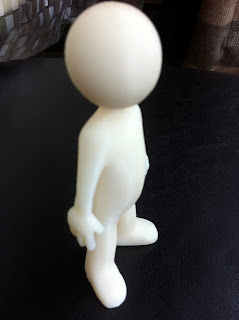 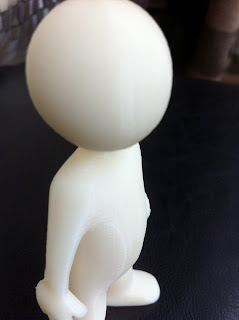 Cute, huh? Jamie will be wanting to draw a face (and other things I imagine) on him as soon as he sees him.
Posted by Rachel Park at 14:31 6 comments:

Over the last few months I have been thinking long and hard about the numerous personal challenges I have received from different people to start 3D printing myself – at home!

I have taken them very seriously actually, because I do understand how big this is going to be – in industry and in general life – one day. Another angle I have considered is that I lose credibility in my commentary because I don't talk from personal experience with 3D printing.

However, I have, tonight, come to the following conclusions:

First, as I have said before, 3D printing is not going to reach its full potential in my lifetime. The true pioneers that are working with the technologies now are vital to the future of the tech, but I know that I am not one of them. I know I'm repeating myself again here, but the technologies, as they stand now, demand an engineering background or technological leaning — I have neither. To get the most out of the existing 3D printing technologies one has to have been educated in that vein and I chose a different path in my formative years.

My university degree is in English — I love books and words and I am most comfortable, happy and productive in that environment. I (try to be) creative with words, although I am not too precious about them. I love using the written word and — you may have noticed — I quite like talking too! But my chosen subject is 3D printing. I don’t believe you can write, convincingly and successfully at least, about something you know little or nothing about, and during the last 16 years I have learned and continue to learn about the industry that I work in. I have built working relationships with many in the 3D printing industry, I have researched and I have listened. I have also asked lots of questions. I know the rhetoric off by heart and studied real applications, I have formed my own opinions based on what I have learned and taken other opinions into account and I do believe that all qualifies me to do what I do. However, I am not qualified to start designing in 3D or printing in 3D — and while the temptation to try has been not insignificant, I am convinced the time and effort it would take to get up to speed and anywhere near successful is best spent in a different way.

That said, I am determined to keep encouraging my children to explore the possibilities, for it will be their generation and the one after that, that will see the greatest impact of 3D printing in the world. I will never force them of course, but knowing, with some certainty, that there will be opportunities aplenty in this area for them as they develop and carve out careers for themselves I see it as a responsibility of mine to at least offer them the benefit of my knowledge and experiences. As you may have seen, there are positive results already. My daughter (14) is looking forward to her product design course and my son (7) is confident in the knowledge that he wants to do the same – just in case his WWE dreams come to nothing. (We haven’t disillusioned him yet, instilling in him that if he trains and works hard enough, anything is possible. We have, however, subtly suggested that he considers a back-up plan!). As and when they need more practical support than I, my husband or our immediate circle are able to offer, I feel sure that my contact network is wide enough to get them what they need, when they need it.

My nieces and nephew are getting the same advice too. I am also talking with the two local schools — one primary and one secondary level about 3D design and 3D printing.

I also fully intend to keep growing my personal 3D printed collection, but my 3D printed items of choice will be printed remotely, by people that know what they’re doing!

My private twitter account bio (@RPES3) states that I "Can be found juggling life ... most days." Well, it's a fair reflection, but the number of balls I'm juggling have increased significantly in the last couple of months as more RPES projects have come my way. I'm not knocking it, far from it, because as a freelancer it's a wonderful thing when people approach you to work with them rather than the other way around.

Most of my typical musings in the last month or so has been published on PersonaliZe, a new online magazine from the publishers of TCT dedicated to 3D printing for the maker and the consumer. Initially, this is a four month contract, and I am spending quite a bit of my time there, and enjoying it thoroughly. It's a great product that will, I think, become a great community of people using and appreciating 3D printing for what it can do. It is also a place that invites opinions of 3D printing — the full spectrum, controversial or otherwise, as the debate continues on how great an impact 3D printing does, can and will have across mainstream channels. At this point in time, I am not sure how things will go after the four months but I am taking it a day at a time and throwing myself into it. One consequence of my involvement with PersonaliZe, together with a couple of other unrelated projects that have materialised simultaneously, is that one of the balls I've dropped has been this blog. It was sort of a semi-conscious decision, born of necessity and the need to get some sleep occasionally!

This post is just to touch base really. I do have a list of posts that I want to write about a number of 3D printing developments that have come to my attention and are backing up, not least the TCT Live 2012 Conference Programme, Mcor's colour 3D printing, LUXeXceL's printoptical technology and I still have copious notes about Neri Oxman's work that I really want to wrap my head around properly, and that's just to name a few. After a day at the Nottingham conference yesterday, keynoted by Neri, and talking to her subsequently, I have more notes! Not to mention the conference has initiated more ideas and quite a lot more gossip — when I go to a networking event, I do tend to make the most of it ;-)

I don't have this juggling lark down to a fine art yet — I will keep aiming for it though!