At the end of last year, at formnext, I was fortunate enough to speak with Dror Danai of XJet Ltd.,  who told me about the company's new metal jetting process. Having seen something similar in the very early stages of development at Nottingham University earlier in the year I was flabbergasted to learn from Dror that this tech was almost commercially ready. He told me it would definitely be in 2016, but the date and show it would be launched at was yet to be confirmed. I saw the video explanation and a few parts that made me really excited, but as usual, I was under strict instructions to keep my mouth shut.

Well now the gags are removed, and today XJET has increased the visibility on the process via a great video on its brand new website. And, in a further move to secure its position as an entrant into the already competitive metal additive manufacturing market, this Israeli company is today announcing the completion of an additional round of funding of $25 million.led by the Catalyst CEL Fund, a private Israeli-Chinese private equity fund and Autodesk, Inc. through its Spark Investment Fund, as well as other existing shareholders.

Despite the metal 3D printing / additive manufacturing sector being competitive, this is something very different to the established sintering / melting / fusing processes of metal powders, and, in my opinion, the incumbents should today be sitting up and taking some serious notice of this announcement.

According to Dror, who is CBO at the company, the XJet process “has great potential to meet the growing demand for producing short runs of metal parts. XJet’s innovative technology uses metal nanoparticles which generate precision parts with complex geometries for use in a variety of applications in aerospace, automotive, medicine, dental and other industries.” 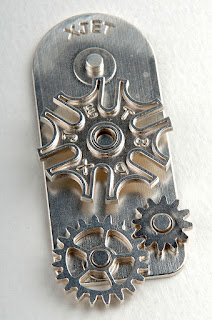 The ground-breaking technology is called NanoParticle JettingTM due to the precise placement of metal nano particles, held in a liquid suspension, to build 3D metal parts. The technology enables a  more accurate production of highly complex parts than that of other current technologies. The video explains it better than I could here.           I can't say I'm surprised that Autodesk has invested, they'd be stupid not to, as far as I can see. But Eitan Tsarfati, head of Digital Manufacturing and general manager at Autodesk Israel explains it more sedately: “Our support of XJet through the Spark Investment Fund stems from our belief that this technology has the potential to change the future of the additive manufacturing industry. Autodesk Israel’s Development Center is focused on driving breakthroughs in the future of making things, and we are proud to work with companies such as XJet that likewise are pushing the limits of manufacturing technologies to accelerate a new industrial revolution.” According to XJet, the current round of funding will be used to complete the development of and to launch Xjet products into main international markets most likely initially in the US at RAPID 2016, in Orlando in May.
Posted by Rachel Park at 11:42