So Stratasys side-stepped CES and waited for SolidWorks World (taking place this week in LA) to unveil its first big product announcement of 2017.

It’s an interesting one too — the F123 series of 3D printers. I had time to ponder when I was introduced to the tech last week under NDA, and later received the PR, which certainly conveys the intent. “Stratasys Targets Professional Prototyping” is right there in the header. The company is pretty much going back to basics with the F123 series, and has done something significant for its largest application market — companies that use 3D printing for the product development process.

Obviously there is also quite a bit of marketing language in the PR too, with terminology attributed to the F123 series that many 3D printer vendors have used in recent years. “First-In-Class,” “Office-Friendly,” and “Engineering-Grade 3D Printing Solution” are all there. It’s easy to roll your eyes and ignore these terms because you’ve probably heard them many, MANY times before, raising expectations that are never quite met.

The way I see it is that Stratasys has taken its considerable knowledge and experience of making 3D printers to resolve some of the issues. According to the company, these F Series printers are not an improved MakerBot/U Print, and they’re not dumbed down Dimensions, they’re new machines, developed from the ground up to offer a prototyping solution (using the additive FDM process) that is easier to use, faster and more reliable. The office-friendly and ease of use are two big issues, particularly in combination. 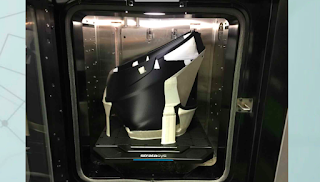 During the webinar last week, Jesse Hahne, President of the design firm CAD (Center for Advanced Design), was introduced as a Beta tester of the F370 model, the biggest system in the series. He was convincing in his testament of how easy this machine was to use, relaying how switching materials and print heads was incredibly simple — Stratasys has ensured these vital operations are much more intuitive, taking only a minute to achieve. In addition, Jesse also highlighted a specific application for a helmet. Previously it had been necessary to prototype it in six parts (on a U Print), but on the F370 it was produced in one piece. Moreover, Stratasys was keen to stress how the F123 series encompass 15 new patents no less. Most of which are dedicated to making the systems more mechanically sound, reliable and intuitive.

The point is to offer a real and economical solution for the complete prototyping workflow, from initial concept verification through design validation and right up to fully functional models for testing, with the ability to do this in innocuous settings — offices, labs and classrooms etc.

In terms of the actual economics, no precise visibility on price, but some sources are quoting “under $20k.” So the costs might still prohibit many. However, it terms of price / performance ratio, this could well prove to be a marked step forward. Also, with there being three models in the series, there will be a price range, but the compromise will be on size not quality or capabilities of the machine. That said, there is still a compromise. We’re not quite there yet! I understand that the F123 series will be commercially available (ie due to start shipping) at the end of March.
Usability of 3D printers is still one big frustration and even remains a barrier to adoption. If there’s one thing I’ve learned over the years, 3D printers (of any spec) tend to be time-consuming things. For hobbyists, that’s no big deal, in fact it’s kind of the point. If you use them for your job, then the actual machine preparation and operations are just frustrating things that eat up your day. It will be interesting to see how far the F123 series of 3D printers goes in overcoming these issues.

In terms of Stratasys’ overall strategy, you need to look at the product announcements over the last 12 months. The J750, launched in April of last year, is all about developments around 3D printing with advanced multi-material capabilities. On the production front, Stratasys hammered its stake in the ground when it unveiled its two additive manufacturing demonstrators in August 2016. Stratasys is clearly committed to driving R&D on every front for 3D printing, highlighting that it’s not all the same thing. And this latest announcement, I believe, is certainly an important indicator that prototyping applications are still the cornerstone of the 3D printing industry. And will probably remain so for many years yet.
Posted by Rachel Park at 10:44