A Round Up of Formnext 2019: Some Additive Manufacturing Highlights & A Reality Check

November means one thing in my world — heading to Frankfurt where the additive manufacturing industry converges for Formnext. Since the very slick and lovely organisers, Messago, first opened the doors on Formnext in 2015, they have very capably filled the gap that the Euromold show left, with this event dedicated to the ecosystem around additive technologies. This was its fifth iteration and the most immediate and striking feature was how big and how fast it has grown. This year the exhibition almost filled four Halls at the Frankfurt Messe, having moved to Halls 11 & 12 (upstairs and down) from its original single Hall 3 setting in 2015. 852 exhibitors presented additive manufacturing hardware, software, materials, post-processing and services to 34,532 visitors across the four days, according to the figures published, post-show, by Message. 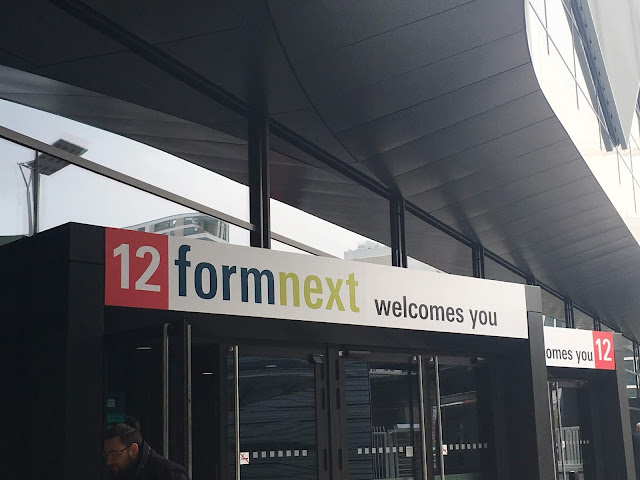 So with that in mind, no human being can cover all of the individual company news from Formnext in a single round-up article — if you’re looking for that sort of insight you’re best off heading over to one of the news sites such as Fabbaloo, 3DPMN, 3DPI, etc, who had teams covering the show. This is just my personal impression from the show and the limited number of conversations I was privy to.

Having grown up in this industry myself over the last *cough* 24 years, its growth— viewed as a single entity — is gratifying to see. It is also overwhelming at times, and such growth also reduces the traditional community feel of the AM industry which is a little bit sad but wholly inevitable. This is also why I have changed my approach to it — to protect my sanity, but still keep things real, in a way that fits into my life.

Anyway, onto my biggest takeaways from this year’s exhausting event, which was also lots of fun for an additive addict.

The rate of growth is testament to lots of new developments across the sub-sectors of the AM ecosystem — the aforementioned hardware, software, materials, services and post-processing — and comes in various forms with new companies entering the sector, established big and bigger companies joining the industry with a new additive focus, as well as existing AM companies expanding rapidly.

In terms of AM processes themselves, invariably the new developments can be viewed as incremental progress that builds on existing and proven technologies. The core processes — laser / electron beam powder bed fusion (PBF), direct jetting, binder jetting, direct energy deposition, vat photopolymerisation, direct extrusion and sheet lamination are all being improved upon in various ways by various and increasing numbers of organisations. As you would expect, the companies with the greatest longevity in this industry are further ahead in terms of being proven and commercial uptake, with the scientific data to back that up.

The key driver for new developments is increasing the productivity of AM, or, another favourite way of phrasing it, the industrialisation of AM. Basically, these are developments that improve throughput in terms of repeatability, reproducibility and traceability as well as increasing part volume throughputs. Approaches to this vary through improvements to the hardware, software, parameter settings, material handling and/or overall workflow and were in evidence right across the show floor.

But there is incremental progress, and then there is step-change progress. Focusing on the latter, there were a few real stand-out developments highlighted at Formnext for me. It should be noted that all of the following are based on scientific developments and only 1 is commercially available, and even that is only in part:

The first, with a prototype machine on the show floor, was from Russian company Microwave Additive Technologies. This was actually presented within a consortium of Russian hardware companies on a stand hosted by Triangulatica. I was helpfully pointed to the microwave AM platform as a must-see because it is a completely novel approach to the PBF process, utilising focused microwave radiation rather than either lasers or electron beams to selectively melt the powder material. The terminology adopted here is, unsurprisingly “selective microwave melting” or SMM. The claim is that using microwaves as the heat source reduces the cost of the hardware by a factor of 10 while increasing productivity by a factor of 100, all while negating part scalability issues. Bold claims, and no specific data to back them up at this point — however I suspect it will be, as it ever was, application specific. But definitely a potential step change development and one to watch.

Another company with a real demo of pre-commercialised hardware, alongside its already commercialised PostPro3D hardware, was Additive Manufacturing Technologies (AMT) Ltd. It’s not AM hardware, but rather everything that comes after. The UK company is wholly focussed on the post processing stages of the AM workflow, and is one of a handful of (relatively) new companies dedicated to AM post processing such as Dyemansion and PostPro Technologies. Also in evidence at Formnext, however, were a number of traditional post processing / finishing equipment suppliers extending their portfolio for AM parts. It is hard to overstate how important the growth of this AM industry sub-sector is. With any traditional manufacturing process and likewise with AM, it is invariably the dirty (literally) and hidden part of the process chain. The companies named here have all developed / are developing automated hardware solutions for finishing 3D printed parts. However, this belies the other post processing steps often required with AM, such as unpacking, de-powdering and inspection / quality control — as well as the finishing itself. This is where AMT sets itself apart and is joining the dots with a fully automated, robotic digital manufacturing system (DMS) that encompasses all of the post processing stages.

Last week I also learned about two other companies that have developed step-change developments for AM processes. One more advanced than the other.

The former comes from Wayland Additive. Another UK company, the fundamental science behind this development is about getting the electron beam melting (EBM) PBF process under control — or, to put it another way, they have neutralised it! The patented NeuBeam technology (in long hand, neutral beam technology) overcomes the charge transfer instabilities of the existing electron beam process that results in difficult, time-consuming and sometimes prohibitive de-powdering requirements of existing EBM that limits the materials that can be used and the geometrical forms that can be produced. The NeuBeam technology has been through years of R&D with a team of scientists and engineers, with a background in the semi-conductor industry and metallurgy, that have developed a new metal AM system from the ground up. The system — located in Huddersfield — is demonstrably working, and I handled parts off it last week. The parts themselves were fairly typical, complex geometries as would be expected at an AM show, it was the time taken to produce and post process them that caused a brow to rise — a lot quicker and much greater productivity / process efficiency. Moreover, the team is claiming that this process can create fully dense parts, with tailored metallurgy — without the need to stress relieve them after the build, all with complete in-process control and transparency. More bold claims, and I am looking forward to seeing the machine, in person, in the new year.

And finally, the least visible step change development I heard about came from some long standing friends in AM. This new venture, called Meta Additive, is based on the extensive research of Dr Kate Black from Liverpool University. Kate, who completed her PhD under Professor Paul Chalker, focused her research on unique materials for additive and has harnessed this into a commercially viable new binder jet process that goes beyond single material use and incorporates smart technology. The new business venture is headed up by Simon Scott, previously of MTT and later Renishaw, along with Professor Chris Sutcliffe. At this point the science and precise details are still under wraps, but with this combined scientific and business pedigree, it would be silly to assume that Meta Additive will be anything other than impressive. Also, there is a clue in the name.

What all of these developments have in common (apart from “Additive” in their names) is science – years of research that are nearing commercial reality (or reached it in the case of AMT) to enable the next generation of AM capability with fewer limitations and greater productivity. It's exciting to peep towards the horizon, but realistically, we're not there yet.

(I wonder how many times I 've written that over the last decade?)

Drilling down into the many conversations at Formnext, and moving past the invariable positive vibes about the growth, the busyness and business as well as collaboration that was going on, I found that a historical theme is still bubbling away under the surface — materials (polymers / metals / ceramics – all of them).

Yes, there are incremental developments here too — new polymers and additional metal alloy variations, are being added to various platform capabilities. Notably, the emergence of copper parts was a big talking point for a number of companies at Formnext, including GE, EOS, Spee3D, Optomec and Farsoon.

Despite this, however, Formnext conversations saw the issue of materials keep coming back to bite, from various different sources. One conversation in particular really focused the mind, in that it brought up how many people are aware of additive as a manufacturing method but they do not understand the reality of how to industrialise it for their given application. Thus, they have the vision for said application, one that the news and the case studies tells them makes it possible, but head towards the realities of R&D and actually the materials still don’t exist to make their vision a reality with AM.

On the upside, there are many, many more material scientists working on this now compared with even a couple of years ago (DSM has been doing it for years, but add in all the other blue-chip materials companies taking AM seriously; as well as the vendors themselves such as Carbon, GE, EOS etc that have strong materials focus; and new companies such as 6K Additive) and it is likely the results of this work will come to market at a much faster rate in the near future. The point I’m making though, is that the reality is still not meeting expectations when it comes to materials for AM.

On a lighter note, after catching a stand strapline on the first night after a glass of wine or 3, I took a picture and posted it on Twitter because I found it hysterically funny at the time (no judgement, please – on this or my crap photography skills) …. 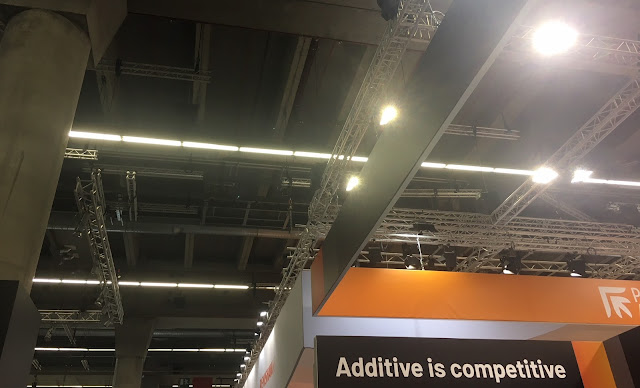 …. but it prompted me to take a look at some other straplines headlining the stands around the show. These are the words that companies choose to put alongside their names and branding to identify themselves, their capabilities or otherwise set them apart amidst an ocean of competition for people’s attention. I literally then spent any spare moments I had on this project because it fascinated me and I now have hundreds of pictures to show for it. But never fear, they’re not all going here – but I will share some of them (in no particular order) to represent the various categories I identified, namely:

I’ll leave you to figure out which goes in what category ……. 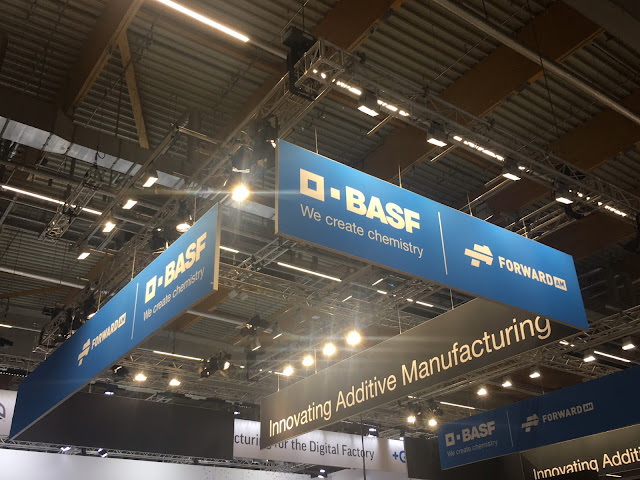 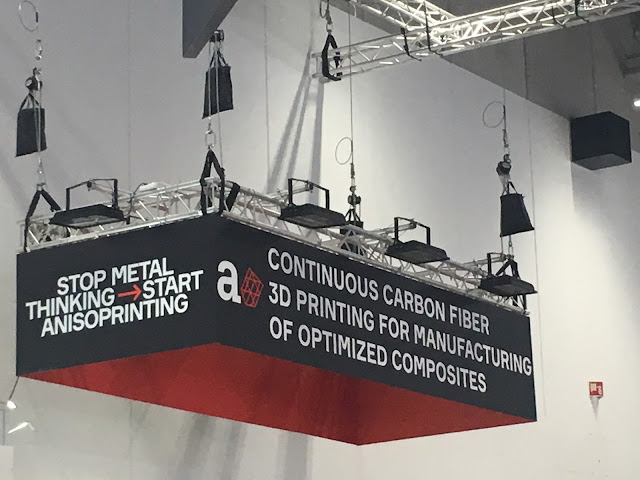 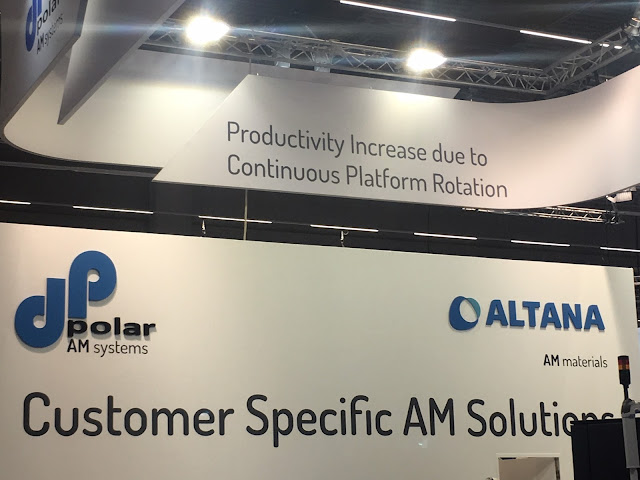 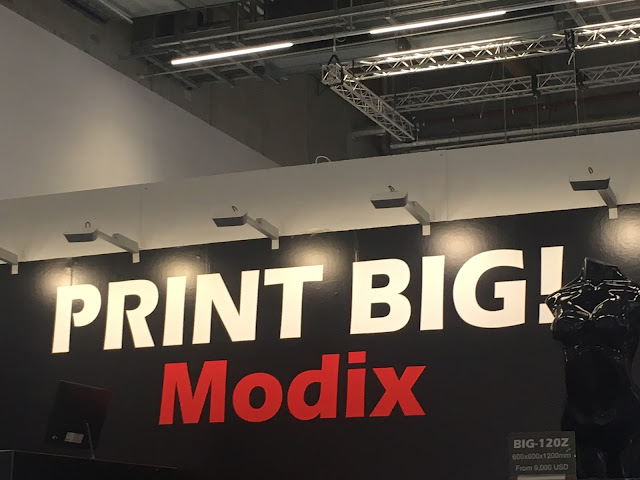 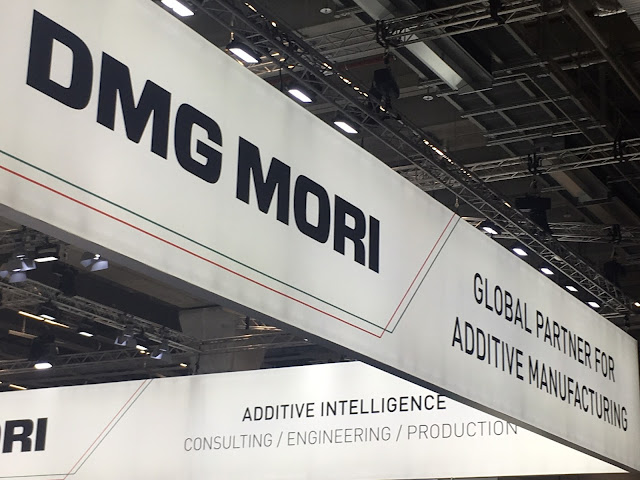 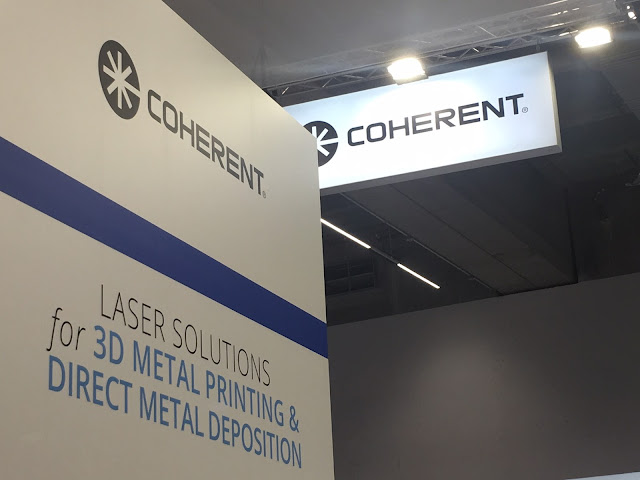 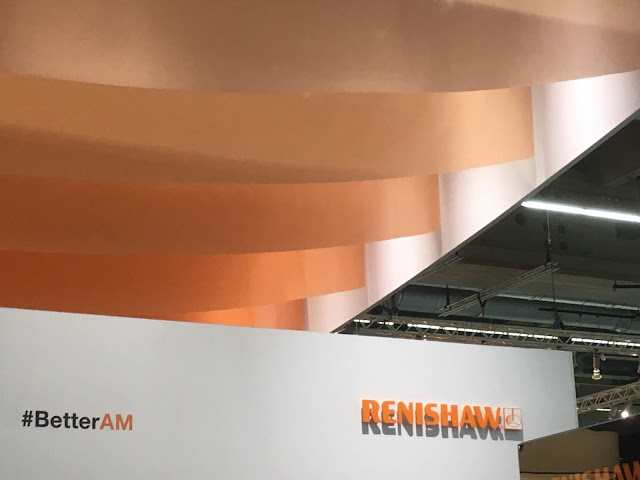 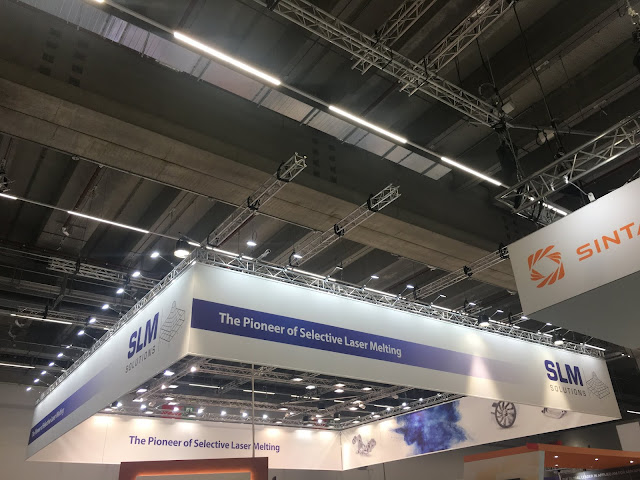 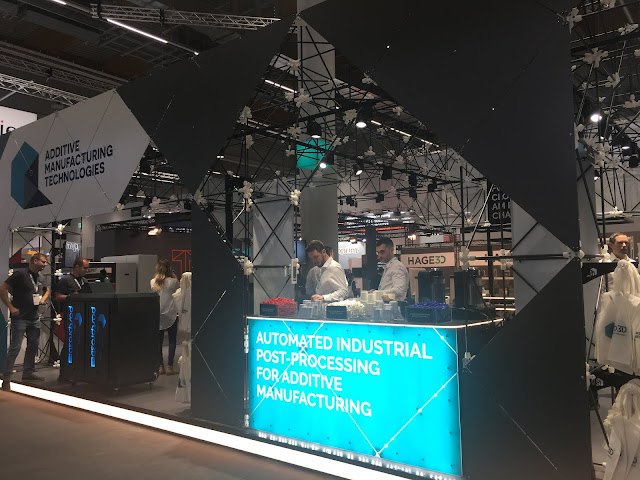 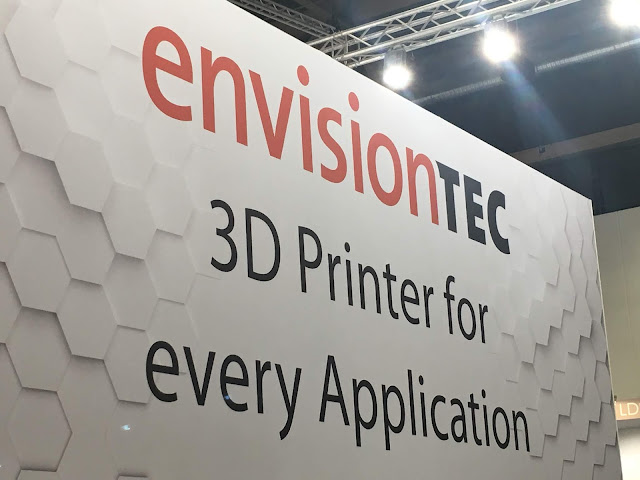 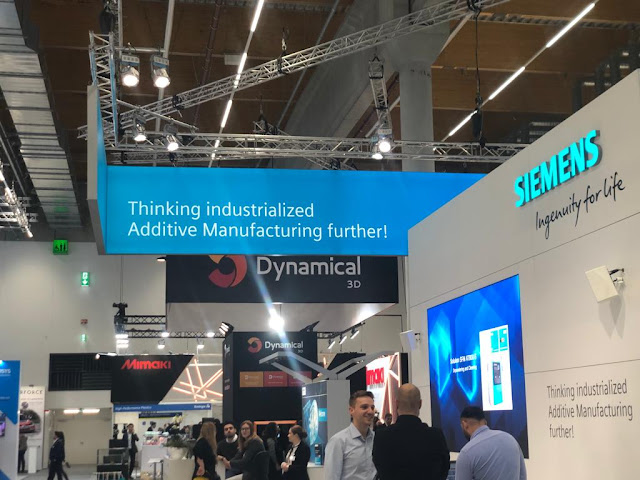 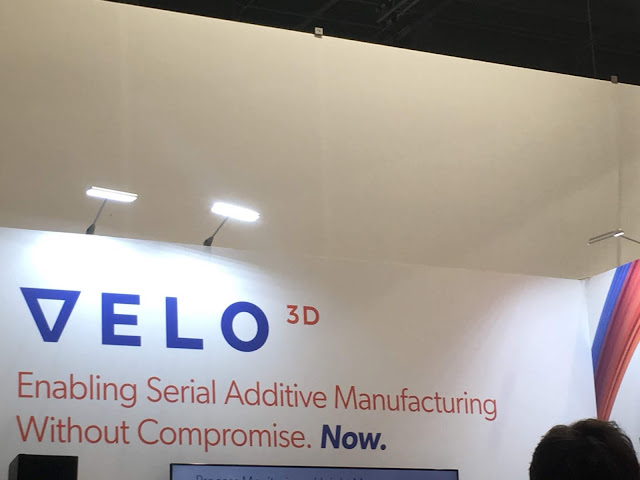 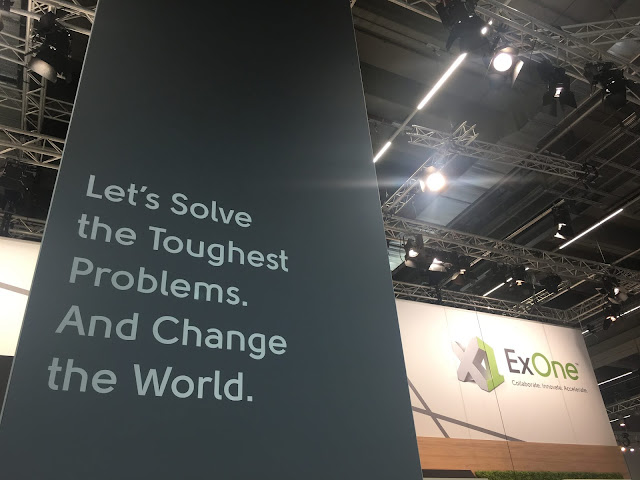 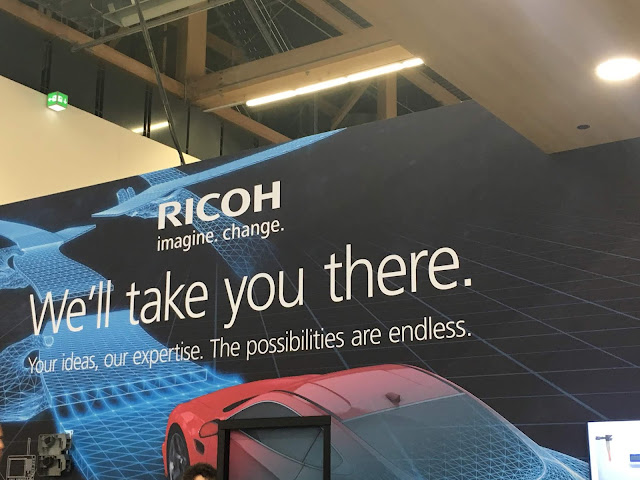 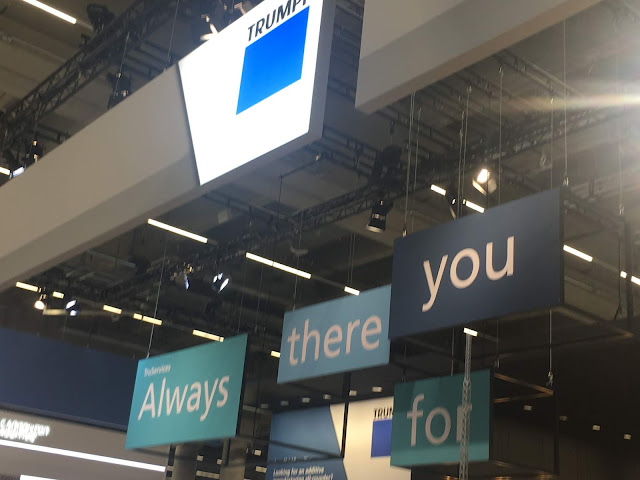 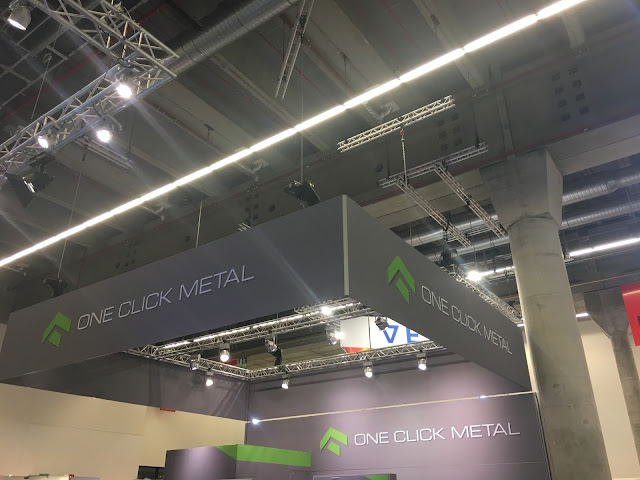