I wrote this recently, and it's a great design story with 3D printing built in. Plus I really do love this jewellery. 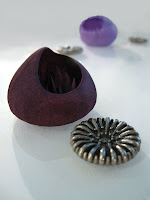 Talented Designer Produces Unique Jewellery Range with a Touch of Advanced Technology
The Chameleon 3D Design Package from A1 Technologies was central to the development of Farah Bandookwala’s intriguing range of Jewellery, which was exhibited recently in Edinburgh and London.
‘Original’ is a word that is often used loosely, but it is wholly appropriate when describing the jewellery created by Farah Bandookwala. Moreover, this originality is built in to Farah’s jewellery — not only is it original in its aesthetic appeal but also in the way that it is designed and made. This talented Masters graduate has just completed two exhibitions in Edinburgh and London with her jewellery ranges that are as unusual as they are eye-catching. The exhibitions were the culmination of Farah’s Masters of Fine Arts (Jewellery) at Edinburgh College of Art following a Bachelor of Design Degree.
The jewellery ranges that Farah has created — “Grow Your Own Bubbles” and “Parasite” — include captivating pieces in their own right. What might not be so immediately obvious is the fascinating journey that the designer has travelled, to date, in the design and development of the pieces. Each piece of jewellery that Farah has created comes from a dual exploration that is central to her work. In her own words, Farah explained: “My work explores the possibility that identity is a fluid entity and aims to allow the user to convey this changing sense of self over time. Alongside this I am also looking at the impact of new technology on human relationships with material culture.”
Introduced to 3D digital technologies during the course of her studies, Farah was designing using 3D CAD fairly early on. However, a placement in 2009 at Anarkik3D — the software developer of Cloud 9  — ensured Farah encountered a different way of designing and creating in 3D: haptic modelling, which enables users to touch and manipulate their virtual 3D models and to connect with them in a tangible way.
During that placement Farah worked with Cloud9 and the Falcon haptic device to understand and experiment with haptic modelling, — the same complete haptic 3D modelling package that A1 Technologies now supplies as Chameleon.  Consequently, Farah now credits that period at Anarkik3D as the origins of her developing her identity as a designer and since that time she has continued to investigate the use of haptics for creative design, with extraordinary results.
Fascinated by the physical interactions with her designs, Farah was able to use Chameleon to subvert the technological process — which is fundamentally mathematical — to create forms that look entirely organic. Farah’s own take on this is that she has created a “purposeful paradox.”
Chameleon’s haptic qualities allow creative people to physically interact with the virtual material. It is both tactile and intuitive. The direct appeal for Farah with using this medium to design her jewellery is the ability to see — and feel — the input in the outcome. Quite simply, her jewellery designs could not have been created any other way.
Using Chameleon alongside a traditional 3D CAD package, Rhino, Farah found that the differences between the two software packages were extreme. Most notable was that while the 3D CAD offered control and precision with surfaces, it just could not compare with the ability to freely sculpture the shapes by directly deforming and manipulating surfaces to create the desired morphing. Indeed it is the freedom of the software that is one of the greatest attractions for truly creative design, with no constraints. The bangle illustrated below is a good example of this.
The fundamental physical interaction of the design stage led Farah to explore the best way to physically create a true representation of her jewellery designs. This journey brought her to 3D printing (3DP), a method of manufacturing that has developed significantly over the last decade from its origins in rapid prototyping (RP) to a validated method of production of parts in plastics, composites and metals. 3DP enables the production of complex shapes and parts directly from the virtual computer design — eliminating the need for machine tools and/or tooling or wax models. For creative applications, the design freedom that this offers over traditional methods of manufacture is remarkable; however, using 3DP in conjunction with Chameleon, the result is truly liberating.
In 2009 Farah secured sponsorship from Shapeways and Laser Lines to prove her designs using 3DP. Her jewellery was produced on different 3DP machines using a range of materials including nylon and stainless steel. 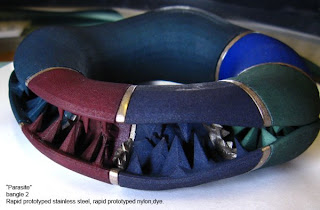 The Parasite series is a range of jewellery that is intended to become part of the body. Beautiful pieces there is also something distinctly uncomfortable about them — a trait that has been achieved by growing them — using 3D printing — on a machine. 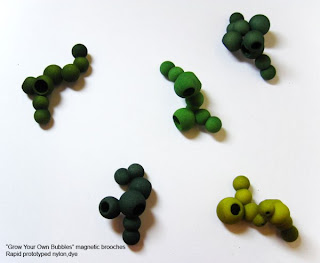 The “Grow Your Own Bubbles” range was conceived to be an adornment that can be re-assembled in various ways as the wearer’s sense of self evolves.
Looking ahead to the future Farah will be considering the potential of clients wishing to wear her jewellery being presented with the opportunity to download and 3D print their own units as they desire them. This is still a speculative aim, but as 3D technologies penetrate more deeply into the consciousness of the general public, it is not beyond the realm of possibility, particularly as A1 Technologies is pushing the boundaries of 3D capabilities, incorporating the Chameleon haptic design product, 3D laser scanning and 3D printing, with a 3D studio package starting at under £2,000.
Biography of Farah Bandookwala
Born in Bombay, India in 1987, Farah moved to New Zealand at the age of 15. Both of these vivid cultures have strongly influenced her work and encouraged her interest in the vastly different approaches to design as a medium for expressing identity across these societies. Farah completed a Bachelor of Design Degree at the School of Art and Design at Christchurch Polytechnic Institute in 2007. Farah has just completed her Masters of Fine Arts (Jewellery) at Edinburgh College of Art.